Glitter Ortiz is the fourth member of the Wubb Girlz and is one of Shine's sisters. She is one of the young wubblings in the singing group, but not as young as Sprinkles and Twinkle.

Glitter is a sweet, young woman. Her heart is like gold. Glitter has a desire and passion for something very "spicy". Glitter has done terrible mistakes in the past, but she chose her road, and she will forever drive on that road. After making those mistakes, she has been very caring. She also knows when someone is hiding a suspicious secret or when something smells suspicious. You could say Glitter is like Sunset Shimmer.

Glitter has something common with the Wubb sisters, Only except some changes are in her outfit; Glitter's main attire consists a pink short-sleeved shirt with a purple belt around the waist, which reveals a pink skirt at the bottom. She wears pink leggings that reveal none of her legs before ending in pink high-heeled boots. She has a big peace sign on her shirt, she has peace sign details on her thigh-high high-heeled boots. She has a hairpin tucked right into her hair with a peace sign on it and she wears pink fingerless gloves.

Glitter and a cute Sonic Maid 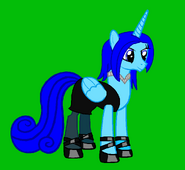 Glitter in her Alicorn form 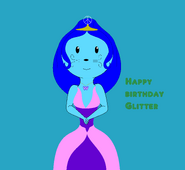 Glitter as a Princess

Glitter with her sister Shine 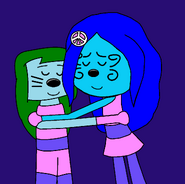 Glitter with her brother Michael

Glitter 2012
Add a photo to this gallery
Retrieved from "https://wubbgirlz.fandom.com/wiki/Glitter_Ortiz?oldid=4832"
Community content is available under CC-BY-SA unless otherwise noted.