Laia is the one of the youngest Ortiz sisters next to Glitter, one of the main progtagonist of Wubb Girlz' Musical Mysteries

Laia was kidnapped by a creature known as "The Shadow" when she was a infant and place in a unknown land, but she was found by a mare named Vik, and Vik took Laia in and looked after her.

During her teenage years, Laia discovered that she had special abilities, and chosen to use them if she needs to.

A few years later, when Laia became a adult, she finally found by her sister, Shine, after a long talk about their family, Laia went to live with her sisters and become a new member of the Wubb Girlz.

Laia is very shy and sometimes nervous, although she has a big heart and loves her family. 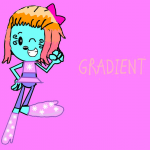