Maetel is a beautiful, yet mysterious passenger aboard the Galaxy Express 999. Her past was filled with tragedy and heart-break, partly why she wandered with the 999 for so long. She met the Wubb Girlz and their friends during their own journey aboard the 999 with Tetsuro Hoshino. After that, she threw away her old life and began anew, to fulfill her own destiny. Maetel is also the manager for the Wubb Girlz.

Born a princess of La Metal, a planet of the Andromeda Galaxy, Maetel and her sister, Emeraldas, had known a life of luxury. However, things began to change as her home planet fell into eternal winter. Her mother, La Andromeda Promethium II, tried to help the residents cope by giving them mechanical bodies, but eventually, succumbed to power-hunger. Maetel, fearing for both her life and her sister's, fled the planet aboard the Galaxy Express 999 and had since then vowed to destroy her mother and the empire she'd created.

Over time, Maetel had suffered a lot of tragedy. But that all changed when she met two young boys during her travels; a boy named Nazca, who was highly opposed to Promethium and helped Maetel realize her destiny, and another boy named Tetsuro Hoshino, who successfully helped her finally destroy her wicked mother and her empire once and for all.

Maetel can be described as a kindly, but mysterious woman. She is known to be strong-willed, emotionally sensitive, but also compassionate and motherly. She has protected Tetsuro and his friends, the Wubb Girlz many times during their journey. She also can be a bit cunning, as seen when she revealed to her wicked mother that she had been planning to destroy the Mechanized Empire her mother had built over several years. Maetel might appear to be frail and helpless, but she is a skilled fighter, with help from her sister, Emeraldas.

Maetel's attire consists of a pillbox-styled fur hat, a black coat-like dress and matching stiletto boots. She also wears a pendant around her neck containing her father's conciousness. Her trademark color for her attire is black (a symbol of mourning, due to her tragic past). But it also has been white (to symbolize her pure heart and strong will), pink (symbolization unknown) and blue (symbolizing sadness).

The following films are where Maetel has made apperances. 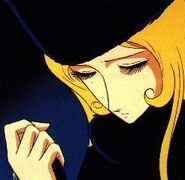